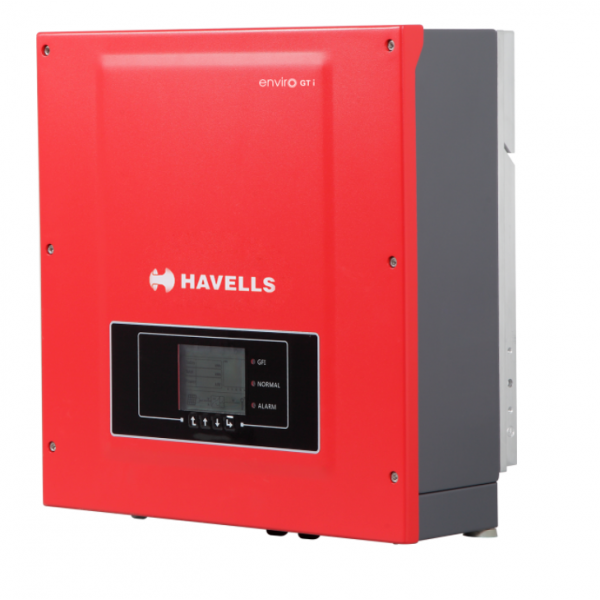 Price has been updated based on your PIN location!

On-Grid  inverter helps in converting DC current coming from Solar panels into AC current, making customers become self-sufficient in power generation and also helping them to produce enough power to give back to local electrical grid. This 5 kwatt inverter has an efficiency of 98.2% and inbuilt MPPT trackers.Havells inverter system is one of the Leading Grid tied solar inverter manufacturer in India.These inverters are being used by Nations Defense, Power Communication and IT Sector around the globe.

Power-One Grid-Tie/On-Grid Solar Inverter is one of the foremost Grid-tied solar inverter manufacturers in India. Power-one on-grid solar power inverter with 5 Kwatt, 3 Phase capacity (3 phase inverter can connect to and export power through three different currents all out of phases) is one of the top inverters that make power cuts a dream for you without depending on diesel generators or battery-powered inverter systems. The power-one grid-tie solar inverters (1kW inverter to the 60kW inverter) or on-grid inverters can be used to power electricity in homes and offices without the need to depend on grid electricity.

This type of solar power inverter is capable of providing net metering capacities and helps in converting Direct Current (DC) into Alternating Current (AC), thereby, helping the people to produce enough power to give back to the local electrical grid. Power-one grid-tie solar inverters (on-grid solar inverter) are designed available to support large variants of isolation values, which makes it suitable in cloudy days and night time as well. The solar grid-tie inverters or on-grid solar inverters on Power-one brands are available at SolarClue online platform and offered to install at a reasonable price.

With just a 1KWatt grid-tie power-one solar inverter system, one can save up to 8,500 rupees per year as compared to grid electricity, thus you can save up to 42,500 rupees on electricity bill by using 5 Kwatt, On-Grid Solar Power Inverter. People may buy solar inverters as per their requirements from the SolarClue platform. Moreover, it is suitable for use in hospitals, schools, shops, and small scale industrial units.

•        Inverters combined with smart PLC are capable of redirecting the excess energy to the grid and allows you to gain a reduction in your monthly power bill.

•        The front the cover employs a patented three-layer construction that shields the inverter from direct sunlight and harsh environment.

•         Optimum utilization of solar energy to charge the batteries and load in the event of power failure.